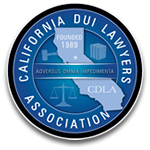 If you were arrested for driving under the influence (DUI) in California, it's important to contact a DUI defense attorney who can protect your rights and help you fight your charges.

A DUI arrest in California can result in jail, fines, and license suspension. Hiring an experienced CA DUI lawyer to represent you during the DUI process will greatly increase your chances of winning your case and avoiding an array of penalties that will have a lasting negative impact on your life for years to come.

California law makes it a crime to drive or operate a vehicle if your blood alcohol concentration (BAC) reaches or exceeds .08%. When BAC levels reach .08% or more, the driver's physical coordination, reaction time, and level of alertness are compromised, significantly increasing his or her chances of causing a serious or deadly accident. Anybody found violating state law by driving a vehicle with a BAC at or above .08% will be arrested and charged with DUI.

In regards to drivers under the legal age of 21, California has a strict zero tolerance policy. Under this policy, all driver's younger than 21 are prohibited driving with any detectable amount of alcohol in their system. This means anyone under age will be arrested and charged with DUI if they are discovered driving with a BAC of .01% or more.

DUI is more than just a simple traffic ticket—it is a serious crime that can result in felony or misdemeanor charges, depending on the degree of the offense.  The majority of DUI cases are misdemeanors, which carry maximum penalties of up to six months in jail, up to $1,000 in fines, community service, probation, driver's license suspension, mandatory alcohol awareness classes, points on your driving record, and more. Felony DUI convictions carry much of the same penalties, but an increase in fines and a much longer amount of time in state prison.

It's crucial for anyone facing DUI charges in Contra Costa or Alameda County to consult with a knowledgeable and well-practiced defense lawyer as soon as possible. You only have 10 days to file for the first step in the DUI process—a hearing with the California DMV. At this hearing, you will have the chance to contest the suspension of your driver's license, which will be confiscated the moment you are arrested.  Hiring an experienced Pleasanton or Hayward DUI lawyer to represent you at this hearing will increase your chances of preserving your driver' license. A skilled DUI attorney can also provide you with aggressive defense, unwavering attention, and invaluable one-on-one counsel during the criminal trial as well.